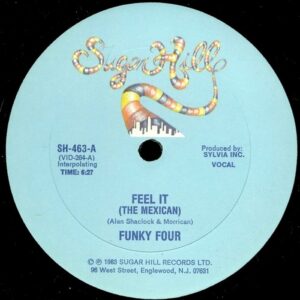 Based around the replayed music of Babe Ruth’s “The Mexican”, this is the groups fourth single. The intro was used on the debut release by Bomb The Bass in 1987 entitled “Beat Dis”.

There are a couple of label variations for this release. One is as pictured and the other has a different catalogue number due to a distribution deal Sugarhill did with MCA (Not pictured). It also has “Mfg. & Dist. by MCA Dist. Corp” printed on the label.