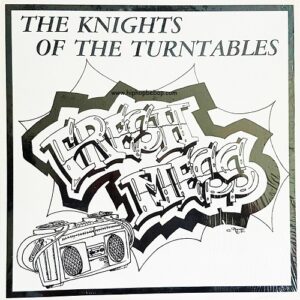 Following Techno Scratch the Knights were joined by Cooley D & Snowman for their follow-up, “Fresh Mess”. This included their own vocal release, “We are the Knights”, which featured Chilly G on vocoder rap.

There are a few variations for this release, although like a lot of JDC releases this seems to have been continually pressed throughout the 80’s and early 90’s. Early pressings had the artist name stretching the width of the label. On later pressings, although still 80’s, the artist name didn’t stretch the full width. Also the runout grooves had an additional RE in the etchings on side B. This was available in both picture sleeve and plain white generic sleeves. There are also later pressings with the name stretching the width of the label and the additional RE etchings on side B.

Some pressings are also transparent when held up to the light. This doesn’t appear to be intentional and is just as a result of a lower carbon mix.