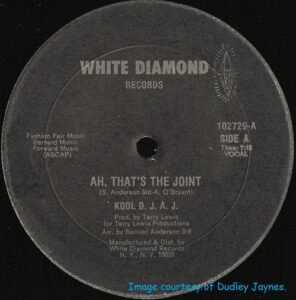 Although Kool DJ A.J. aka A.J. Scratch (R.I.P.) appeared as part of the Marvelous Three alongside Chief Rocker Busy Bee & DJ Small on the track “Rappin’ All Over” with the Younger Generation in the same year, this is his debut solo release and was produced by Terry Lewis.

There is no date on the label but it is widely believed to have been released originally in 1980. It was reissued as a double A side to Spoonie Gee’s “Spoonin’ Rap” on Tuff City in 1988 and then again in 2011 on a 7″ by Get On Down but with original labels.

A.J. went on to appear with Chief Rocker Busy Bee in the movie and on the soundtrack to “Wildstyle” and then on to feature as Kurtis Blow’s DJ.