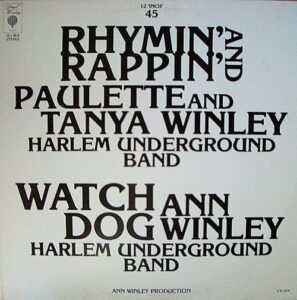 This was the debut release by Paulette and Tanya Winley, daughters of label and shop owner Paul and his wife Ann. Following a recording session with the Harlem Underground Band, label owner, Paul Winley requested that the band play while his daughters rhymed. As a result of this session, “Rhymin’ And Rappin'” was made and released to the public on his own label. It was one of the first rap releases and was backed with the funky soul track “Watch Dog” by his wife Ann. There was also an alternative pressing which included the classic funk track “Bra” by Cymande on side 2 instead of Ann Winley.

The Paul Winley label can be a bit of a minefield regarding first, second, etc pressings so I won’t even attempt to say which one is first but just show the variations that I know of. An obvious identifier of an original pressing though is that they have a single deep and wide press ring compared to the less prominent ring on the 2000’s reissue and are pressed on heavyweight vinyl.

Some copies were released in a plain generic sleeve and some came in a printed and pasted card sleeve. The printed sleeve has a couple of variations itself. Some have the name printed as Tanya and some have it misspelt as Tayya. On the later 2000’s reissue the name was spelt correctly.