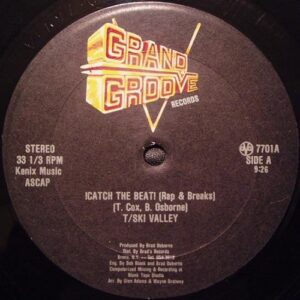 The second release on the label was T-Ski’s own “Catch The Beat” utilizing Taana Gardner’s “Heartbeat” and in my opinion, is one of the greatest feel good disco party raps, although apparently it began as a complete flop and didn’t really start to sell until a year after it was pressed which is when they changed the label to red.

In 1983 it was reissued on Dee Jay Records, a subsiduary of Grand Groove Records, with Just Four on the flip, followed by a European release in 1984 with a remix version by Pascal B titled “Catch The Beat (Scratch The Beat)”. A Tuff City reissue followed in 1988, itself with a few label variations, and finally Get On Down reissued it as a red vinyl 7″ in 2011.
T-Ski Valley @ Facebook
T-Ski Valley II @ Facebook