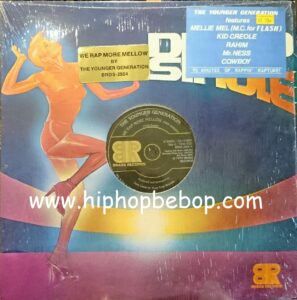 Based around the disco jam “Every Way But Loose” by Oneness Of Juju, the track was produced by Terry Lewis who released it without the group’s consent using a false artist name. Many of the lyrics can be heard on their classic “Superappin” which was released on Bobby Robinson’s Enjoy label the same year.

There are a few releases by the Younger Generation but only this one features Grandmaster Flash and the Furious Five. It seems that Terry Lewis continued to use the name, possibly as an alias, on other tracks. For example, the Marvelous Three & Younger Generation release, also on Brass, only featured the Marvelous Three. There was also a UK only release in 1984 that used elements of Dr. Jeckyll & Mr. Hyde’s “Fast Life” plus a track by Prince Sneed in 1985.

The record was repressed in the early 2000’s but is easily distinguishable from the original due to the smaller font. See images below.