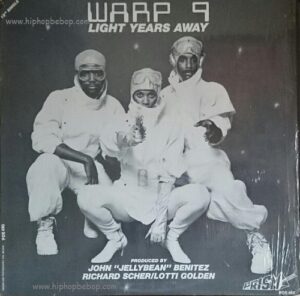 Following the success of “Nunk”, Golden and Scher recruited Ada Dyer as a female vocalist for this second release. Milton ‘Boe’ Brown, Chuck Wansley and Ada were now the face of the electro funk group Warp 9 and in my opinion, this was their finest moment.

There are a couple of label variations for the promo release. One is the same as the general release containing vocal and dub versions but, similar to the previous release, there is also a promo only pressing with a slightly different catalogue number which has long and short vocal versions but no instrumental.