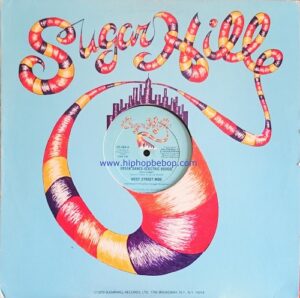 I won’t list all their releases, just the hip hop ones, so fast forward to 1983 and they had a change of style when they released this hip hop/electro vocoder anthem sampling the classic breakbeat “Apache” by the Incredible Bongo Band. I’m not 100% certain who did the scratching for this record but an educated guess would suggest Grandmaster Flash although the following release mentions DJ Scott. I’ll update when I know for certain. Assistant producer was Reggie Griffin of “Mirda Rock” fame.

There are a few label variations including one with a different catalogue number, SH-32005 not pictured, due to their short-lived deal with Universal but identical track listing. There is also a single sided acetate.