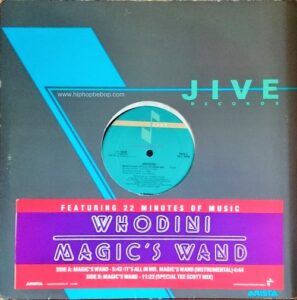 After releasing the solo track “Smirfathon U.S.A.” earlier in the year, Jalil Hutchins teamed up with John “Ecstacy” Fletcher to form the group Whodini.

This track was originally conceived as just an idea for a radio promo for the legendary Mr. Magic on WBLS but lead to it being their debut single. Written by Jalil & Mr. Magic, it was apparently the first rap track to feature an accompanying video and featured production from Thomas Dolby and mixing by Nigel Green of the Willesden Dodgers plus included an extra long remix by Tee Scott.

It was released in a Jive company sleeve with a hype sticker across the bottom and there are a few label variations which are pictured below.