3-D were the trio of Ralph D’Agostino, Tommy Musto and Tommy Sozzi.

Following Tommy Boy’s 1983 competition entitled ‘Hey Mr. DJ Play That Beat Down By Law Switch The Licks Mastermix Contest’ which resulted in the classic cut-n-paste remix of G.L.O.B.E. and Whiz Kid’s ‘Play That Beat’, Tom Silverman decided to launch another similar competition, this time titled “Tommy Boy Renegades Of Funk Big Beat Bust Out Mastermix II”. The successful mix would appear on the forthcoming ‘Tommy Boy Greatest Beats’ compilation album and would be a megamix of the featured tracks.

The winners were 3-D and their winning megamix appeared on Tommy Boy‘s Greatest Beats album and was also released as a promo only 12″.

I’ve found a few variations of this release although if you also check the runout groove etchings, there may be more. One easy to spot variation includes only four lines of credits beneath the artist and title, all the others appear to have five. Of the pressings with five rows of credits, there is also a limited pressing on red vinyl and a later pressing, possibly 2000’s, which uses a slightly different font. The easiest way to tell the difference is that the later pressing has “winner” printed at the start of the second line instead of the plural, “winners”, which is on the original pressings.

Although all three producers had successful music careers, recording under different aliases and as members of various groups, Tommy Musto and Tommy Sozzi also formed Dynamic Duo and recorded the classic hip hop/electro track ‘Knights Of The Turntables’ for 25 West Records. 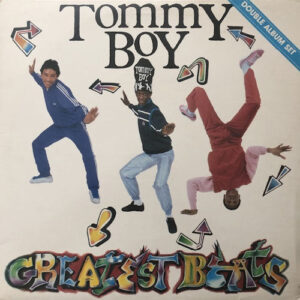