Dizzy Heights (Brian Beaton) honed his skills in places such as the Wag Club, Titanic and London’s first hip hop club, Language Lab. He was a former member of Newtrament’s The Krew before joining The Rapattack Sound System and was one of the first UK hip hop acts to sign to a major label, releasing Christmas Rapping in 1982.

In 1984 he appeared as a member of The Council Collective, a group consisting of Paul Weller‘s Style Council and various guests such as Dee C. Lee, Junior Giscombe, etc. He recorded the track, A Gospel, as Dizzy Hite with the group which appeared on their Cafe Bleu album, retitled My Ever Changing Moods in the US, and after his signing to Polygram the following year, reworked the track for his debut release on the label, subtly retitling it The Gospel! (Tell It Like It Is).

Dizzy went on to release several singles, experimenting with a more dance based sound and also ventured into the world of acting, with guest appearances in a couple of TV shows in the 1980’s. 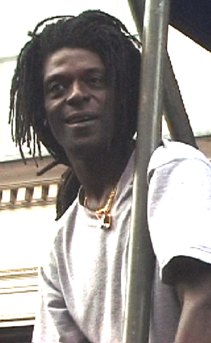 Notes: This was issued in two different sleeves but the labels are identical.

Notes: This was issued with two different sleeves and note the different B side label designs.