Originally known as the Imperial 5, the members were Mark Ski and Mr. Ice, who were friends from their early teens, Soul Supreme Mean Gene, OG Rock and Prince Master Rhymes who was introduced to the others by Mr. Ice. The group also had casual members such as Brother B of the B-Boys, Dizzy Dee, Too Swift & Jay Cee.

Following the incarceration of Prince Master Rhymes, the group became the Imperial 4, however, due to the comings and goings of the casual members a decision was made to simply call themselves The Imperial Brothers. Together with their DJ’s Disco Dee and Doc Savage only Mark Ski aka El Don, Mr. Ice, OG Rock and Soul Supreme Mean Gene aka Chedda actually featured on any recordings. All the artists names including the DJ’s are etched into the runout groove on the B side of their debut single.

The group signed a 5 year deal with brothers Aldo and Amado Marin’s Cutting Records in 1984 and released their debut track We Come To Rock produced by Hashim and Aldo and engineered by Jay Burnett. We Dub To Scratch also featured the DJ skills of Whiz Kid (RIP).

The following year saw the release of the follow-up single, Live It Up, which was the final release for the group. It was produced by Hashim with percussion from Soul Supreme Mean Gene and chorus vocals courtesy of Joyce Simpson. Joyce also lent her vocal and writing skills to two further Hashim produced tracks and then to Motown R&B artist India Arie.

Following this release the group sadly split. El Don and Mr. Ice had a falling out over a deal with Def Jam which they never signed and OG Rock just left the business completely. The group continued with El Don and Chedda but there was no further success.

El Don made a return in 2008, featuring on various mixtapes and videos before doing a mixtape with DJ Envy. Nesto Banks was a long time affiliate of the Imperial Brothers. He was at every show they performed and even occasionally rocked the mic but was never an official member until 2011.

In 2011 the group was recruited by Morgan Khan to record a single for his Nu Electro Vol.4 compilation. They’re comeback single was Breathe and gained the group a lot of attention, especially in Europe.

The group continue to make music today which you can hear across all the usual streaming platforms. You can download their music direct from Beatport here. 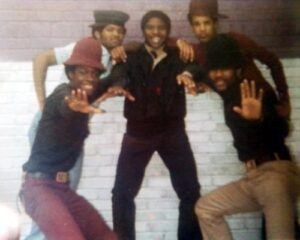 We Come To Rock

Notes: Note the two different pressings: one with the label address at the bottom and one without.