Born Errol Eduardo Bedward, Bronx native Pumpkin was a multi-instrumentalist best known for his drumming skills and was known as the original King of the Beats. He began his career producing records for Bobby Robinson’s Enjoy label before signing with Profile where he continued producing for other labels,  such as Tuff City, under aliases such as B. Eats, Bedward and Jack-O-Lantern.

He is responsible for many classic hip hop tracks by artists such as Spoonie Gee, Disco Four, Funky 4+1, Masterdon Committee, Dr. Jeckyll & Mr. Hyde, Outlaw Four, Fantasy Three, Great Peso, etc but is uncredited on some, Funkmaster Wizard Wiz’s Put That Head Out and Spoonie’s Get Off My Tip, to name just a couple. Check Troy L. Smith’s tribute thread at OldSchoolHipHop.com.

King Of The Beats was his debut release as an artist and featured scratching by Scratch On Galaxy aka DJ Galaxy (George Llado). This was followed by the classic, Here Comes That Beat! which featured fellow Profile artists, Dr, Jeckyll & Mr. Hyde and Greg G & Mr. Troy of The Disco Four plus Fly Ty-rone, who only seems to appear on this release, together with Scratch On Galaxy once again. The track was engineered by Dave Ogrin, who provided some additional information regarding Pumpkin…

One story about him always comes to mind. He was a little hard of hearing after working on so many records. He used to like to work at Quadrasonic studios in the B room, which was a small room with giant speakers that were hung fairly close to the mixing board. He always wanted to turn it up as loud as possible, beyond what anyone else in the room could stand for very long. He went to the owner of Quad, Lou Gonzalez, who was a technical genius and asked if Lou could figure out how to make the speakers go even louder. Instead, Lou created a special pair of headphones for Pumpkin which were made from two Autotone cube speakers. These are actual small speakers meant to be used as speakers in a room, but Lou strapped two of those to Pumpkins head and cranked it up. It was insanely loud, but it made Pumpkin happy and saved all of our ears. [Dave Ogrin 2016]

Sadly Pumpkin passed away in 1992 from pneumonia. 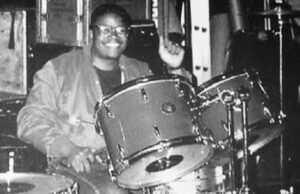 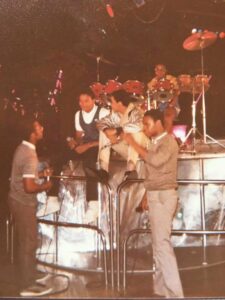 King Of The Beat