Rob, his DJ partner Tiny Tinman, and their crew made a name for themselves by throwing jams in places such as Clark Park.
Check out this post by Troy L. Smith on Skeme Richards’ Nostalgia King site about when Rob met and DJ’d alongside Grandmaster Flash and also the video at the bottom where Rob tells the story in his own words.

The Original Mean Machine was originally recorded in 1981 at J&J Studios but never released. For years the track sat on a shelf on a multi-track master tape until it was unearthed and finally produced for a physical vinyl release on a large hole 10″ single by guitarist, Jimi Hazel, Rockin’ Rob & Victor Piagneri aka The Undercover Brother and one half of 90’s group, Nubian Crackers. 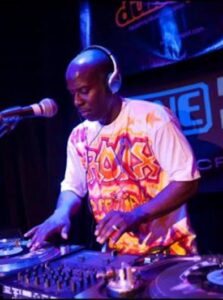 Side A
Side B
Front sleeve
Back sleeve
Previous
Next