Originally named Steps, the jazz fusion group Steps Ahead were formed in 1979 by vibraphonist Mike Mainieri. They were formed in Seventh Avenue South, a New York jazz club owned by Michael and Randy Brecker, The Brecker Brothers, and changed their name in 1983 when Don Grolnick left the group. The roster has changed over the years but for the purposes of this release, the members included Mike Mainieri, keyboardist Warren Bernhardt, saxophonist Michael Brecker, drummer Peter Erskine and bassist Eddie Gomez .

Although they had released previous albums, it wasn’t until 1984 that they released their first single, Radio-active, taken from the album, Modern Times. It was a perfect fusion of jazz and electro and appeared on Volume 4 of the Street Sounds Electro series in the UK. 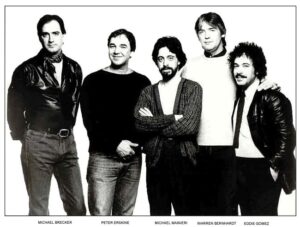