Super Nature consisted of Salt (Cheryl James) and Pepa (Sandra Denton). The duo met while studying nursing at Queensborough Community College. One of their co-workers at the time, Hurby Luv Bug (Hurby Azor), was studying record production at the Center of Media Arts and asked if they would record for him as a class project so, together with their DJ, Spinderella (Latoya Hanson), they produced ‘The Show Stoppa’, which was a response to Doug E. Fresh’s ‘The Show’.

The track featured an intro by the then unknown Kid Coolout (Christopher Reid) aka Kid from Kid N Play and beatbox by Quick Silver (Eric Johnson) and gained significant airplay. As a result, it was officially released by Quazar / Pop Art Records in 1985. Following its success, the group were signed to Next Plateau Records and changed their name to Salt N Pepa. The name was referred to in ‘The Show Stopppa’ when they mention the Salt & Pepa MC’s.

Meanwhile, although she appeared on their early releases and on their debut album cover for Hot, Cool & Vicious, their original DJ Spinderella (Latoya Hanson) was replaced in 1987 with Deidra Roper. 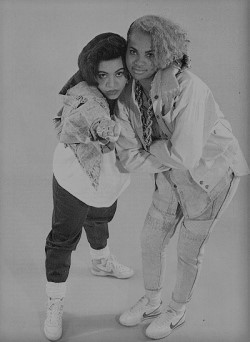 The Show Stoppa (Is Stupid Fresh)