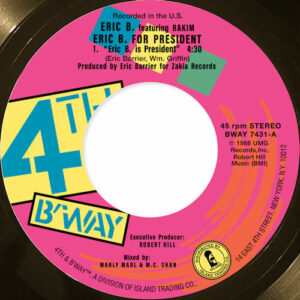 Eric B. and Rakim created 4 LPs together between 1987-1992 and in that 5 year period they were able to carve out their reputation as one of the greatest hip-hop duos of all time. “Eric B. Is President” was the world being introduced to Rakim in his rawest form. The rap god was unknowingly laying the foundation for a career that continues on today and is consistently recognised for changing and pushing the boundaries of the hip-hop genre.

King Underground bring you their very first official reissue, and what better track to reissue than the mighty ‘Eric B Is President’ mixed by Marley Marl & MC Shan.

You can pick up an original 7″ for anything over £100 or grab this reissue cheap-as-chips.

This is the black vinyl pressing only, other colourways are available direct from King Underground. 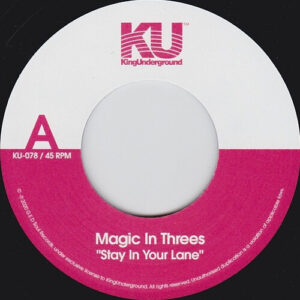 King Underground bring you Magic In Threes, a Nashville based instrumental combo specializing in a psychedelic cinematic soul. Heavy on atmosphere and dope beats, our style thrives on a healthy diet of library records, hip hop tapes, and herb. 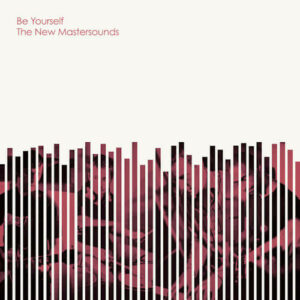 The New Mastersounds – Be Yourself (LP) [King Underground 2021]

The Leeds band has played gigs in Mexico, Europe, the USA, and all over the UK, with highlights including the legendary Jazz Cafe in London, Chicago’s famed House Of Blues, and backing Sax legend Lou Donaldson.
Other career highlights include being sampled by DJ Shadow, remixed by Kenny Dope, as well as providing the soundtrack for the Commonwealth Games in 2002. 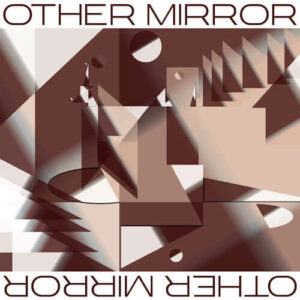 Other Mirror was formed by longtime friends, Jonny Cuba (Soundsci Producer) and James Tilley (multi-instrumentalist). In 2018, the band found themselves creating music together, for a project that they had talked about starting since becoming school friends many years prior. Although this is the band’s debut album and debut on King Underground, the members who make up the group are far from newcomers.

Each individual brings a strong track record of music and creative experience to the project, which informs each of their musical philosophies and approach to collaborating and conceptualizing art together. 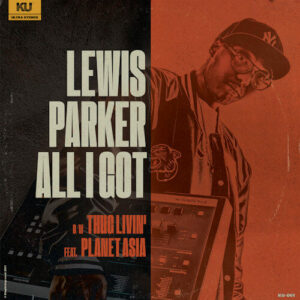 Lewis Parker and the guys at King Underground bring you a proper 12″ single with instrumentals and acapellas. All I Got is flipped with Thug Livin featuring Fresno rapper, Planet Asia.

Available on both black and red vinyl. 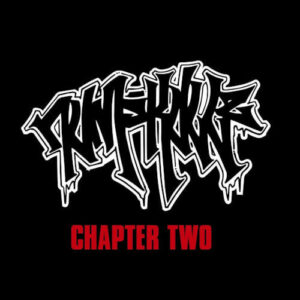 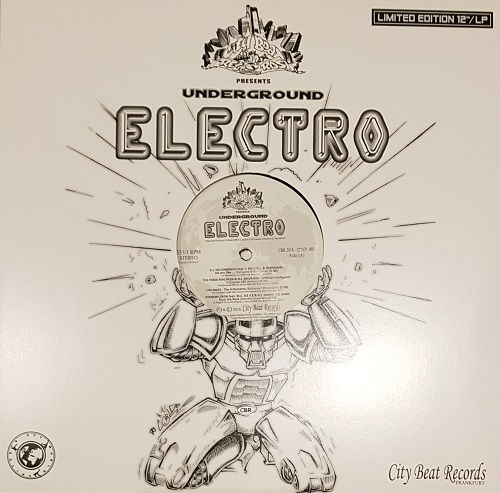 DJ Salva’s City Beat Records out of Germany bring you the new school electro heat once again on a nice slab of coloured vinyl. If you liked electro back in the day you’ll love this. 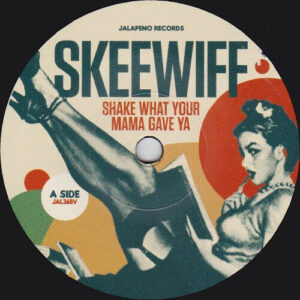 Jalapeno Records is a label that prides itself on providing the finest eclectic music. No other artist embodies this spirit more than founders Elliot Ireland and Alex Rizzo, collectively known as Skeewiff.

They’re legends in the underground funky scene, finding themselves the delighted proprietors of worldwide number one hits, running their own Pedigree Cuts library music imprint, working with heroes like Alan Hawkshaw and amassing a high-quality body of work that would be the pride of any ambitious musician.

Their joyous blend of impeccable production, astonishing taste and rare ability to not take yourself too seriously is captured in the two tracks that appear on this new 7” release. Big beats? country & western? sitars? funk? soul? And more? It’s got everything that will guarantee to make you Shake What Your Mama Gave Ya! 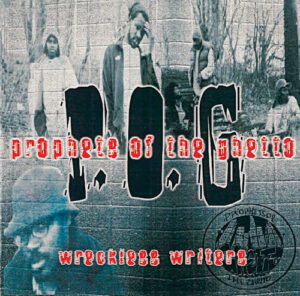 Underground headz will know the deal! This is one of the grails a lot of CD headz have been looking and waiting for and we finally made it happen!

Prophets of the Ghetto are a West Philadelphia based hip-hop group that formed in the early 90’s. The four emcees in the group (Meat Matter, Big Bob da Norfstar, D.B.L. and Phat-Nice, a Southside Chicago import) gel flawlessly with beats and scratches from the group’s producers and DJ’s Benellis, Gamez, DJ Ken-Cut and DJ Dyce.

Wreckless Writers was the group’s debut album originally released back in 2000 but the tracks of the album were all recorded between 1996-1999. Although Wreckless is P.O.G.‘s first release, the members of the group are not rookies. Besides performing at several shows in Philadelphia, they accompanied Bahamadia (who is also featured on the album) on her European tour and freestyled on the renowned Wake-Up Show in San Francisco.

Now in 2022 HHE is proud to bring this album back as the original CD-R release was only released in very limited fashion. You will get the original 15 tracks + an extra unreleased track “Chastisement” that was recorded during the Wreckless Writers sessions. We also added the 2 last tracks P.O.G. recorded and released in 2002 namely “Chillin On The Chillin Chillin” and “Support”. The Hip Hop producer Diamond D debuted in 1992 with his album Stunts, Blunts and Hip Hop. It became an underground masterpiece with the vibe of the 90’s studio ambience. With experiences of his later partners Big L and Fat Joe he created his New York sound. A huge part of the songs is recorded with the help of his crew the Psychotic Neurotics. The beats of the song “Best Kept Secret” sets the tone for the massive rhyming of Diamond D. The reason that everything sounds just as it should be is the fantastic production of the songs. “Sally Got a One Track Mind” is another classic tune by the formation and one of the highlights of the album.

Joseph Kirkland, better known by his stage name Diamond D, started working in the music industry by the end of the 80s and produced music for lots of artists, like Lord Finesse, Fugees, Outkast and ADOR. During the years he also released solo albums, the latest dates from 2014.