Originally released in 1983, Wild Style is a cult movie and its OST is the first and best hip hop movie soundtrack.

Tracks from Wild Style have been sampled by artists such as The Wiseguys, De La Soul, A Tribe Called Quest, Beastie Boys, Beck, Cyprus Hill, DJ Shadow, Nas and Public Enemy among others.

This release is the 25th Anniversary Edition and contains a bonus disc with previously unreleased beats and instrumentals alongside a Lesson-style cut-up by turtablist Kev Luckhurst. 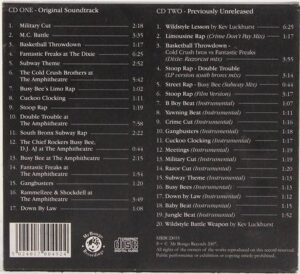